Impact of EoS on Neutrino Opacities in Core-collapse supernovae

Impact of EoS on Neutrino Opacities in Core-collapse supernovae 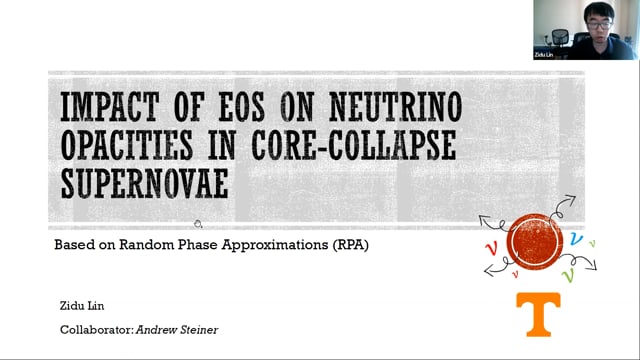 Neutrinos radiate 99% of the energy and play a crucial role in the explosion mechanism and nucleosynthesis of core-collapse supernovae. The neutrino interactions in hot and dense matter is a complex problem due to bound nuclei and the strong nuclear forces. In this work we calculate the dynamic and static response of the neutral current and charged current neutrino-nucleon interactions, from low-density region near the neutrino sphere to high-density region up to approximately 1.5 saturation densities at finite T, by applying random phase approximation (RPA). We emphasize on the consistency between an equation of state (EoS) and the neutrino opacity, by using the density-dependent residual interactions, effective mass, single nucleon potentials directly derived from an EoS which matches experiment, theory, and observation in various density regimes. We further analyze the effect of EoSs on neutrino opacities by calculating the statistical uncertainties of neutrino opacities. We found that our neutral current static response based on RPA is close to the results from model-independent virial approximation at low density, and our description of neutrino opacities at high densities have large uncertainties due to still unclear strong (especially spin-dependent) nuclear forces.