In September 2016, the National Science Foundation’s Nuclear Physics Program created a new Hub — short for Focused Research Hub in Theoretical Physics — in the area of Multi-Messenger Astrophysics. The Hub consortium of 11 institutions took the name N3AS – the Network for Neutrinos, Nuclear Astrophysics, and Symmetries. With additional support from the Heising-Simons Foundation, N3AS’s primary goal is to develop the theory tools for interpreting observations from a new generation of astrophysical facilities. These facilities will probe some of Nature’s most extreme environments, thereby testing our understanding of fundamental physics in regimes not accessible on earth. A second important goal of N3AS is to train a new generation of postdoctoral Fellows, helping them develop as broad theorists with the tool sets needed to address the physics of neutron stars, mergers, supernovae, and the Big Bang. N3AS physics interests include the neutrino flavor physics of these extreme environments, the properties of dense nuclear matter important to neutron star structure, the explosive synthesis of new nuclei, the use of high performance computing to model mergers and supernovae, and the possible signatures of dark matter and new weak interactions in astrophysical environments. The Hub was funded for five years through a cooperative agreement with Berkeley, with a schedule of activities that will be completed in 2022. It made an auspicious start, with the first group of N3AS Fellows arriving just as LIGO announced its observations of the first binary neutron star merger.

On September 1, 2020, N3AS began a new era as a Physics Frontier Center, following an NSF competition: PFC activities will ramp up as the Hub completes its physics program. The PFC collaboration includes new members who will strengthen N3AS efforts in supernova, merger, and kilonova modeling, the analysis of astrophysical data sets, and the role of dark matter in astrophysics. It also includes two new institutions, New Hampshire and Penn State. N3AS-PFC physics is organized around five scientific Major Activities — Neutrino Properties in Astrophysics and Cosmology; Nucleosynthesis; Dense Matter and Neutron Stars; Dark Matter and its Astrophysics Implications; and Astrophysical Simulations. The PFC will allow N3AS to create a physical center at Berkeley, co-located with astrophysics centers funded by RIKEN and CNRS. Through these international partners, N3AS will have ties to KAGRA and HyperKamiokande in the Kamioka Laboratory, and to the Virgo data analysis team. The PFC provides funding for a variety of activities that will benefit the broader astrophysics community, including workshops, an annual summer school for advanced graduate students and beginning postdocs, and student exchange with European Training Networks. It also includes an outreach program focused on undergraduate astrophysics research as a tool for encouraging transfer students to persist in difficult STEM majors. 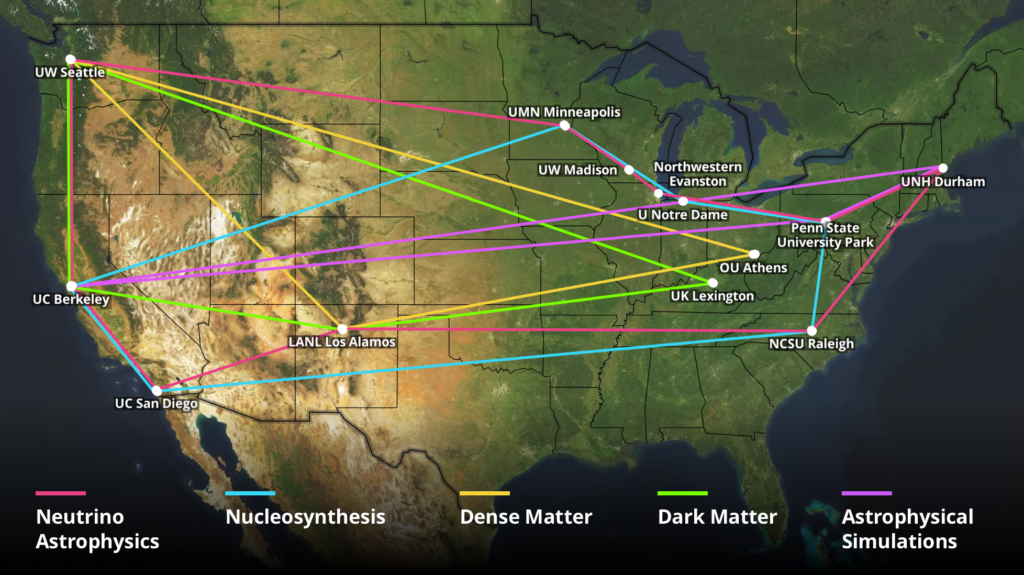