The fate of twin stars on the unstable branch 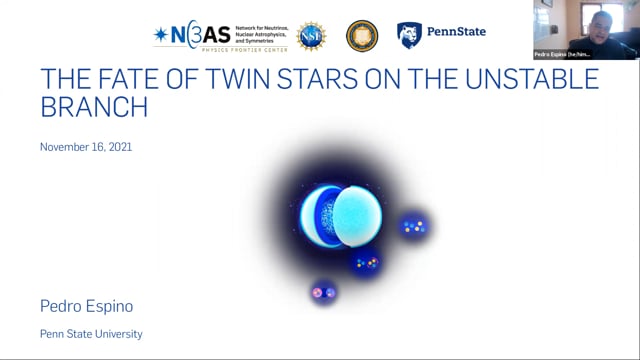 Hybrid hadron-quark equations of state that give rise to a third family of stable compact stars have been shown to be compatible with the LIGO-Virgo event GW170817. Stable configurations in the third family are called hybrid hadron-quark stars. The equilibrium stable hybrid hadron-quark star branch is separated by the stable neutron star branch with a branch of unstable hybrid hadron-quark stars. The end-state of these unstable configurations has not been studied, yet, and it could have implications for the formation and existence of twin stars — hybrid stars with the same mass as neutron stars but different radii. We modify existing hybrid hadron-quark equations of state with a first-order phase transition in order to guarantee a well-posed initial value problem of the equations of general relativistic hydrodynamics, and study the dynamics of non-rotating or rotating unstable twin stars via 3-dimensional simulations in full general relativity. We find that unstable twin stars naturally migrate toward the hadronic branch. Before settling into the hadronic regime, these stars undergo (quasi)radial oscillations on a dynamical timescale while the core bounces between the two phases. Our study suggests that it may be difficult to form stable twin stars if the phase transition is sustained over a large jump in energy density, and hence it may be more likely that astrophysical hybrid hadron-quark stars have masses above the twin star regime. We also study the minimum-mass instability for hybrid stars, and find that these configurations do not explode, unlike the minimum-mass instability for neutron stars. Additionally, our results suggest that oscillations between the hadronic and quark phases could provide gravitational wave signals associated with such phase transitions in core-collapse supernovae and white dwarf-neutron star mergers.